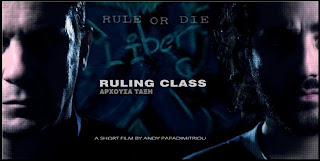 
In Greece in 2015, the government's right wing, through a period of turbulence generated by the enormous economic crisis, it loses the confidence of the people and overturned by an important left wing part of society which is represented by the Party of the ''Left-Wing Liberty'' . The new authority has become an authoritarian regime, and place agents throughout Greece in order to stifle any minor rebellion of right wing groups. The two extreme sides of the new order are expressed through the story of two friends, which turns into a political thriller where political and human values collide. Vasilis, an agent of the regime of the ''Left-Wing Liberty'', is in dilemma over whether or not to kill his best friend, Giorgos, who is adherent of the right wing, and he wants through his actions to restore the previous social structure and status . Their wives, Mary and Amanda, are those who constantly remind them of the value of friendship and try to reconnect them before it is too late ...


What is stronger? The hypocrisy of political ideology or the human factor? Could the ruling class show a more human character in the name of friendship?


The conflict is inevitable ...
And the end will change the lives of the two friends forever ...